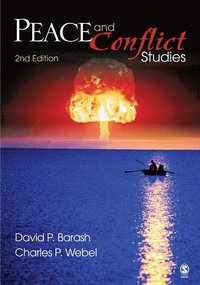 This core textbook comprehensively introduces students to the relatively young interdisciplinary field of peace and conflict studies. Five years after the text's original publication, it is time for an update that reflects changes on the world scene, as well as the need to add new material and expand on other topics.

The Second Edition of Peace and Conflict Studies responds to current challenges while still retaining the thoroughness that has made the original edition so successful. This field is unabashedly value-oriented, and although the authors are up front about their own values and opinions, they attempt to present all sides of complex debates to assist students in forming personal and social opinions, insisting only that those opinions be informed by serious intellectual effort.

With the inclusion of new pedagogical features, as well references to current world events affecting students' lives, the text continues to encourage independent and critical thinking among student readers.

- A cohesive four-part organization that moves the reader from an overview of peace and war, to the reasons for war, 'negative' peace (peace that is more-or-less imposed), and concluding with 'positive' peace (peace built around basic human rights, economic well-being, and nonviolence).

- Emphasizes important themes and readability rather than immersion in the technical literature, making the book accessible to undergraduates.

New to this Edition:

- 'questions for Further Study' at the end of each chapter. .Suggested additional readings will also be included for those students who wish to read more about a particular topic.